It all started with an episode of Suits on USA Network from January 31, 2013 (episode 213: Zane vs. Zane) where the opening scene has the two main characters (Harvey and Mike) playing a round of H-O-R-S-E trashketball in Harvey's office.  I jotted this one down on my digital "task ideas" list and knew it might have some potential later this year in Geometry. Here's Act 1:


Dan Meyer has thrown us some wonderful updates on 101qs.com. Head over to the Trashketball task where you will get all the goods when you sign in:
Act 1: video to wonder and notice about
Act 2: teacher notes, and visual data/information to help solve the task
Act 3: visual confirmation of the practical answer
Sequel: additional tasks to explore (especially for early finishers) and teacher notes

I was going to chip away at this task until I realized Pi Day was coming up. Needless to say, I started working a little quicker. Ironically, in calculating the answer to the task, Pi can actually be divided by itself or "cancelled." I grabbed (bought, not shoplifted) two trashcans from Bed Bath & Beyond. I found the exact trashcan from Suits. Woohoo!!!! That circular truncated cone trashcan is so dreamy and transparent. I also found a cylindrical trashcan for my Geometry class. As you can see from Act 1, it's not transparent, but it'll get the job done. Measuring each dimension of the can was simple. Measuring the diameter of the trashketballs is a different story. I'm open to suggestions here. You'll find this in the "Teacher Notes"

How do you find the diameter of a trashketball? Have your students come up with ideas. Test those ideas. Make conjectures.

An extension to the task would be to explore the difference one-tenth the radius makes in your calculated answer. 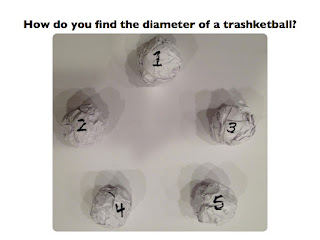 Seriously, I'm open to ideas. I quickly discovered that trashketballs are like snowflakes: no two are the same. However, I really started to perfect the form and process of making a trashketball. I'll admit, there's some buy-in with the trashketballs being perfect spheres. I'm okay with that. So maybe spend some time with your students perfecting the trashketball. Anyway, leave some ideas about measuring the diameter of the trashketballs in the comments, won't ya?

I'm looking forward to this task. My students occasionally play trashketball in my class with their scratch paper or class handouts (not necessarily mine) contributing to their idea of going paperless. I see this happening a lot on Thursday. Happy Pi Day!