We encounter many low bridges on our drive to Mt. Vernon each year when we take our 8th graders. Our bus driver must pay extremely close attention. This textbook problem reminded me of our experience. I'm playing along with Dan Meyer's Makeover Monday. Here's the task:
I'm curious how you would make this over. Next Monday, I'll post what you do and what I do to this task.

Garage Jams are my #TMC13

Divisible by 3 is usually used for math talk. It's summer and this post has nothing to do with math. It's just a post about something I love to do, play live music. While so many fun people are enjoying their time in Philadelphia at Twitter Math Camp (#TMC13) this week, I've had the pleasure to jam with my nephew and edit some of the video we captured. For those of you looking for math stuff, my next few posts will definitely be filled with math... trust me.

I set my Flip camera on a tripod in the corner of my garage for capturing my nephew on drums and I taped a GoPro camera (thanks Karim) to the headstock of my guitar for those guitar licks. Here's a quick soundcheck:


My nephew and I get together every so often to jam. We mainly rock out to songs by our favorite artists or songs from the bands I was in during college. Last summer, he added drums to my PEMDAS song. Between the two of us, we'll choose a few songs, practice them individually, come together, talk about a few transitions or endings, count off, and then rock out! Everything here is our first take. I'll start you off with Jimi Hendrix's Spanish Castle Magic found on his album Axis: Bold As Love.


As you can see, we're not trying to nail these songs note for note. We enjoy adding our own style, sound, or feel to the songs we cherish while maintaing the integrity of the original. It's just drums and guitar in case you're wondering why there isn't any thumping bass or screaming vocals. I'm using the audio from the GoPro camera which ended up capturing the sound decently. As for the following songs, the camera definitely picked up more drums than guitar in the mix. That's okay because we're not out to release this stuff for a record deal. This is just pure fun and I'm using this creative space to post it. Up next, Rage Against the Machine's Guerrilla Radio found on their album The Battle of Los Angeles.


Tom Morello comes up with these simple, yet powerful riffs while adding some slick effects to his overall sound and solos. It's always fun and challenging for me to figure out what he's actually using and playing. We had a few other jams on 2013-07-23, but this will be the last one I share here. You'll find updates inside this Vimeo Album. We both enjoy Incubus and have jammed to many of their songs. This last song was a last minute decision, but I think it turned out alright. Here's Blood on the Ground from their Morning View album.


It's always a blast getting together with my nephew. He's off to college in the Fall and our opportunities to get together and jam will be fewer. Maybe we can jam via Google Hangout! It's been a pleasure to watch him improve at drumming over the years and really have a wonderful ear and talent for music. As promised, this post has nothing to do with math. I'm not rambling about how jealous I am of those at Twitter Math Camp because live music truly has a special place in my heart. I'll return in a couple of days with some thoughts as I prepare for my CMC South presentation in November.

Today, at Estimation 180, I posted some guest blog posts I collected from the beginning part of this year. I'm grateful, honored, and inspired by the stories they (or their students) shared. I hope you have time to check them out and share your story too.

Last post, I shared a lesson (Woody's Raise) that included both Act 1 and Act 3. I asked you all to collaborate and design Act 2. Many of you came through like champs in the comments.
THANK YOU!

For this post, I only have an Act 1, leaving Act 2 even more open-ended. I'll admit, I only have Act 1 because I haven't invested the time necessary for Act 2 and Act 3. Here's my current Act 1. 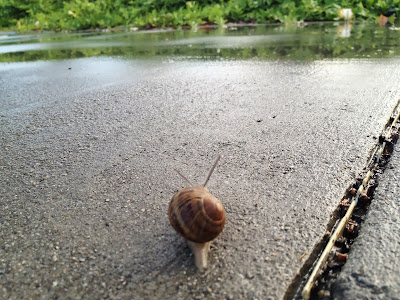 I thought of this lesson many months ago while out walking in the morning, but wanted to capture it on video... no joke. So until that time actually comes along, I'll give you what I envisioned for Act 1, the video version. We start with Bill Conti's Gonna Fly Now (Theme from Rocky) as we take a couple close-up shots of the snail. The camera pans out to a bird's eye view of the snail starting at one side of the sidewalk, letting time elapse for about 15-20 seconds.

Head over to Dan Meyer's 101qs.com and enter a question (or skip it) so you can see my Teacher Notes for Act 2. You might need to log in. Thanks to Ignacio Mancera for linking a site with Speed of Animals. This will help assist our Act 2 adventure. 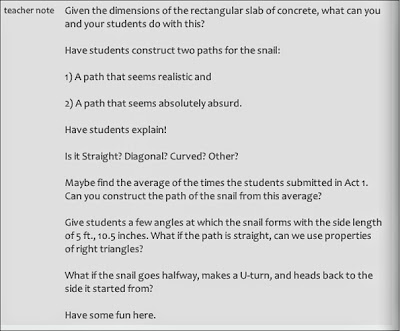 What initial conversation(s) would you have with students?
How would you have students work with Act 2 information (dimensions, rate of snail)?
Is this a waste of time?
Should we (I) shelf this idea for now? (or even toss it in the trash can?)

We decided to get Netflix recently and I was excited to see that Cheers episodes are available. I occasionally put an episode on in the background while I get work done. I came across this episode that literally snuck in some math (money, raises, time, rate) right before the end of the episode. Sam Malone, the owner of the bar in the tie (played by Ted Danson), is talking with Woody Boyd, a bartender (played by Woody Harrelson), about a raise. Roll Act 1:


After consulting with my man, Nathan Kraft, I bleeped out a part of Woody's last line. The two of us discussed the tendency a bleep can have in implying some profanity was removed. So if this lesson goes horribly wrong, blame Nathan! All those toothpicks finally caught up with him. Here's how the exchange goes between Sam and Woody:


Sam: We were talking about your 50 dollar a month raise.

Woody: Sam, it was a hundred a month.

Sam is caught for trying to pull a fast one on Woody. Woody appears to let it slide, but something occurred to Woody. He turns to Sam and the exchange continues:


Woody: I think a hundred a month is too steep. I'll settle for [BLEEP] a week.

Sam (without blinking): You got it!

I anticipate students noticing that the amount was bleeped out and wondering what was bleeped. I anticipate students not sure if Woody said, "[BLEEP] a week" or something inaudible? I anticipate students noticing that the studio crowd laughs while wondering if Sam was just made a fool by Woody. I would love to first have a leisurely conversation with students about who they think just got the better deal in this exchange, Sam or Woody? Or was there even a better deal to be had? If you've ever watched an episode of Cheers, you know that neither character has a strong IQ. If anything, Woody is portrayed as a real naive, gullible, and takes-you-at-face-value type of character. Sam is about a handful of points above Woody. So what about Act 2 after you take some guesses from the class on who just got the better deal from this exchange?

This might be the first 3 Act lesson in which I don't have any additional information for Act 2. In all fairness, this might not fit my previous rant on measurable acts, but I think the 8 Standards for Mathematical Practice are rubbing off on me (in a good way), especially Practice 4: Model with Mathematics.

I posted the Woody's Raise lesson on 101qs.com with very little in Act 2 because I'd love to know where the teacher would take this with his/her class. This type of teacher discretion can't be packaged in an online portal or catalog of video instruction. Here's what I threw out there for Act 2 (the first edition):

At what "raise" amount per week would Woody "settle" for the:
I have many questions when thinking about Act 2. Here's a few:
Over time, when does Sam or Woody begin to benefit or suffer from this deal, compared to the $100 raise per month?
Do all months have exactly four weeks? Does that matter or should we use 52 weeks in a year?
How would you anticipate students representing Woody's better deal versus the worse deal?
What would this look like graphically?
What would this look like organized in a table?
What equations could you anticipate students writing? If any?
How does this deal apply to Woody's hourly rate?
In what classroom could you talk about the tips Woody might make? Remember this takes place in a bar. Middle school students? High school students? College? A workshop with teachers? I think there's a lot of fun to be had with this video clip. Let's Roll Act 3 and see what Woody would "settle" for instead of the $100 a month raise:

I'm posting this lesson because I'm thinking out loud. More importantly, I'm curious what you would do in between Act 1 and Act 3 with your students. How would it be different in an elementary classroom? Middle school classroom? High school classroom? Teacher workshop? What would your Act 2 be? Where would you take this lesson with your students? I believe this is a multi-dimensional lesson that can take on some great mathematics. Bleeping out that weekly rate in Act 1 really opens up Act 2 for some rich mathematical discussions and modeling. Toss your Act 2 in the comments. Thanks!

Back to School Ignite Talk

Why not do my own version of an Ignite talk at Back to School Night next year? I get 10 minutes with parents and would love to change it up a little this coming year. Trust me, after surviving last year, I think the parents deserve a better, improved, and more reassuring version of Mr. Stadel. I'll explain that last sentence in some upcoming blog posts that I'll use to debrief about the 2012-2013 school year. If you're not sure what an Ignite talk is, let me introduce you to my man, Steve Leinwand.


If you like that, check out more Ignite talks by Annie Fetter, Dan Meyer, Max Ray, and Phil Daro. These are my go-to talks when I need a math pick-me-up. Do the math, that will be a little over 20 minutes well spent, being inspired by some key people in our math community. Seriously, check out those four talks.

I'm brainstorming in this space, so feel free to share some input please. At Back to School Night, I'll start by giving a brief 30-60 second introduction of what an Ignite talk is and how they work. I'll give an Ignite talk for 5 minutes, covering any of the following things:
This leaves approximately 4 minutes for parents to ask questions or something else... Have any suggestions for those last 240 seconds?

*UPDATE: Each item listed above does not correspond to its own slide. I simply listed ideas that could possibly work their way into the presentation. Some support each other. For example, when talking about the importance of problem solving, I would mention resources such as 3 Act lessons and The Math Forum's PoWs. Feel free to add to or subtract from the list.