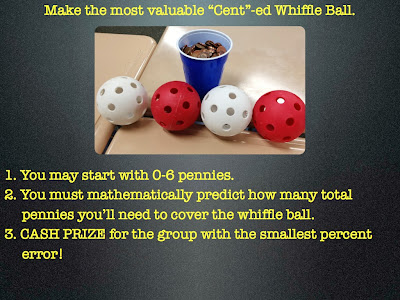 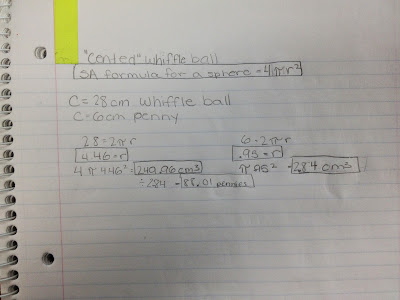 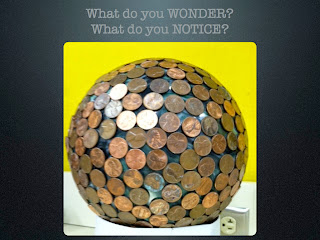 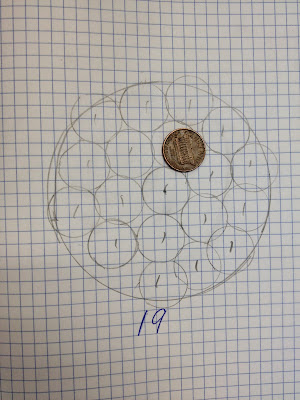 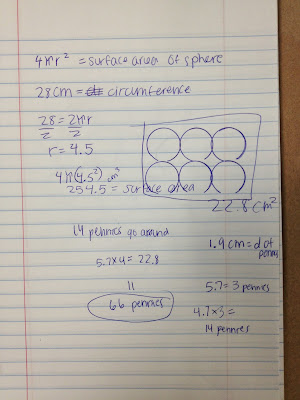 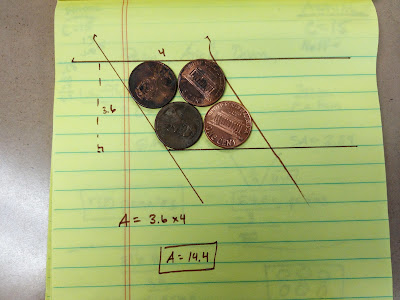 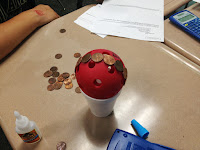 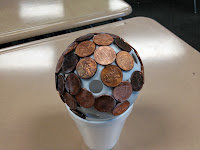 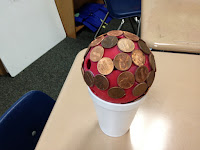 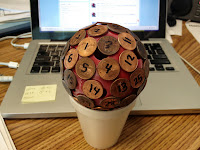 Gadzooks! You wake up tomorrow with amnesia!

Someone significant (spouse, child, significant other, neighbor, etc.) in your life informs you that you teach math. You get dropped off at your school (place of work) and are led to your classroom. Your principal can't find a substitute and your colleagues run to the photocopier to make you some busy-work handouts. You can't remember any mathematics and your students are 10 minutes away from entering your room, oblivious to all of this.

You look down and see this on your desk. 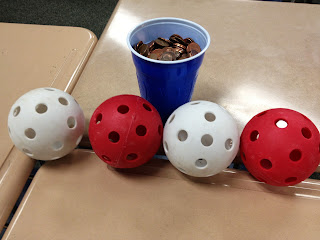 What do you do?

Last week, my geometry class entered the room with the following directions waiting for them:

*Toss the trash. Keep the scissors. 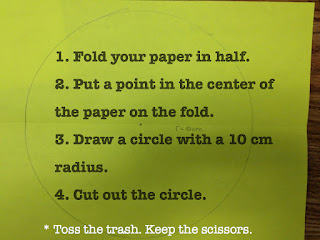 We had just completed Dan Meyer's Popcorn Picker the previous day and I promised the class I'd bring in popcorn for a job well done. My local store didn't have a bag of pre-popped popcorn so I bought a 10 oz. bag of Pirate's Booty instead. Oh darn, right? That stuff is insanely awesome. Stop reading this and go buy a bag if you've never dabbled in the addictive powers of Pirate's Booty. As the students are cutting out their circles, I say:

If you can make me a cone, I'll fill it with Pirate's Booty. All you need is a tiny piece of tape and I don't want any folding to form your cone. Figure it out.

Student 2: I'm not sure how to do this without folding it.

Some quickly figured out how to cut the radius and overlap the paper to form a cone while others needed to see their peers do it. Most cones took on the form of your typical snow cone. However, Chase came up to me last and held out this slightly bent circle that barely resembled a cone. Sneaky, yet I was secretly hoping someone would do this. I admire his ingenuity for creating a cone that maximized his Pirate's Booty. We enjoyed our snack as we did our estimation task, flying from Boston, MA to Philadelphia, PA. After finishing our estimation task, I tossed this tub in front of the kids and said:


Don't get weirded out by this, but partner up with someone and measure each other's hat size in centimeters. In other words measure the circumference of their head and write all those numbers on the board. 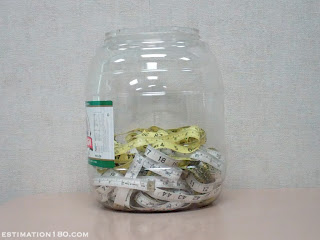 
Me: Ughh, guys? What are those numbers?

Me: Measured in what?

Me: Did you not hear me say centimeters?

Me: That's fine. Leave it. Most of you are done.

Sean: But Chase and I just got done measuring in centimeters.

Me: You two rock! Go back and get quick measurements in inches and add them to the board.

We got our two last numbers and I wanted to tell them that based on their inability to measure in centimeters, we'll be making dunce caps instead. I wisely passed on that joke and told them:

The class average ended up being 22.5 inches. I held up my two hands and told the class I wanted the cones to be about "so" high. I measured the "so" length of my hands to be about 9 inches.


Me: How much paper will we need to be cone-heads?

I wish I could tell you that my students worked diligently and strategically to figure this task out without any hiccups, hurdles, roadblocks, or challenges. I'd be lying. They struggled. The closest anyone came was Chase who asked if we could use the Pythagorean theorem. Like you need my permission, Chase? Ha! This felt very similar to Fawn's recent post When I Got Them To Beg. They needed some strong guidance. As Fawn would say, "They beg. I win."
I'll give you a nutshell walkthrough of the activity:

This is where I really challenged the students to finish this. What do I do with all these numbers?

Devon: We could divide the two areas so we know what percentage of the [9.69 in. radius] circle we need.


Me: Now what? How does this help us figure out what to cut? I don't need the entire circle. What do we do?

Sean: We can figure out what 37% of 360 is and create that angle within the circle.

Me: Okay. What does that mean?

Nick: We need to make an angle of 133 degrees in the circle with the radius of 9.7 inches and cut it out.

Me: Okay. How many cone-heads can we get from one circle?

Brace yourself. This is one of those moments when students blurt out answers before thinking:
ONE!
THREE!
TWO!
NO WAIT, TWO!
YEA RIGHT, TWO!

The math is done. Now we start cutting. Here are the kids in action and our stockpile of cone-heads. 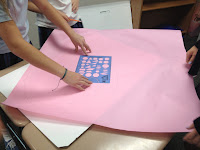 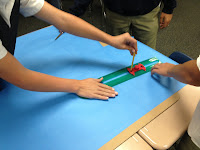 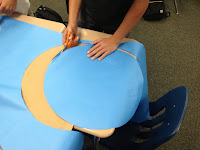 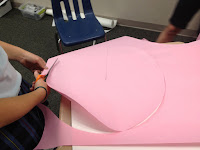 As a bonus, I had some ribbon lying around so students made chinstraps since some of their head circumferences were beyond the class average. Someone suggested we use rubber bands for the chinstraps so they could be just like party hats.


Me: Are you kidding? Do you remember who's in this class? You think it's a good idea to give some of these guys rubber bands? 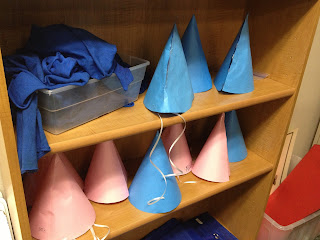 Let me tell you, those cone-heads looked awesome! I told them they could wear them for the rest of the day. I'd send an email to their teachers explaining our learning and that students are expected to respect the wishes of their teachers. If other teachers want them to take the hats off in class, they better follow directions. Furthermore, if any foul play happens, their cone-head is to be confiscated and I issue an automatic detention. We didn't have any problems. Now, go make some cones!