Today, I had 25 minutes to get as far as possible with Couch Coins and a second grade class at my school. I'd like to debrief on a few things, but here's Act 1.


During the Summer 2012, I found a money/coins concept in a Second Grade Everyday Mathematics book similar to Couch Coins. I was inspired by PES' Coinstar commercial and ran with the concept. The intended question is: "What coins will my wife get?" On my way into work knowing that I would soon be surrounded by seven and eight year olds, I announced to Twitter that I'd be doing this 3 Act lesson with second graders today and wondered how it will go, asking for their thoughts. The response was great. Robert Kaplinsky, Christopher Danielson, and Sadie Estrella all chimed in offering that money can be challenging and to be careful of the "fewest coins" part of the task. In other words, finding the total value of the coins and half the total might just be challenging enough for second graders. Chris Lusto (in true Lusto fashion) provided some comedic relief:


Act One: Which one of these kids do you think has to pee? Act Two: Watch them squirm. Act Three: Reveal. (Act Four: Clean up.)

Why just 25 minutes? I had to bail after 25 minutes to go teach my own students (8th graders) or else I would have had about 50 minutes with these second grade kiddos. So what transpired in those precious 1500 seconds? I asked the students what they wondered and noticed about the Act 1 video. I had them write down at least one thing they wondered and one thing they noticed. I asked them to share, starting with "notice." Keep in mind my time was limited here so I only took a few...

Now, I asked what they wondered. I followed each student question with, "Who else would like to know the answer to that question?"

-Why are the coins moving out of the couch? 10
-How did the coins stack like they did? 7
-How much is half of the coins? 10
-How many coins were moving on the couch? 3

Not one student asked anything about the coins my wife should get. NO PROBLEM! You can see there was a tie between two questions and don't ask why the numbers are so low; the class had 26 kids. I told the students since most of the questions revolved around the animated coins, I would reveal the camera magic at the end while we focus on the other top (main) question: How much is half the coins?

Time for estimating the right answer and guessing a number that's too low and too high. The second graders really enjoyed this part. One student felt 10 cents was too low because they saw quarters. One student was very proud of his $99,999 being too high. Once we got our estimates, I asked the class to read and revisit the main question: "How much is half of the coins?" I typically ask my students to reengage with the task/question before moving to Act 2 so we are reminded of our task.

Here comes Act 2: I asked the students what information would help them answer the main question. Many raised their hands. One student said, "We need to know how many of each coin." This was immediately followed by agreements voiced as "yea" or "that's what I was going to say." I displayed this information and we had less than 10 minutes to work. The second grade teacher broke the kids into groups. 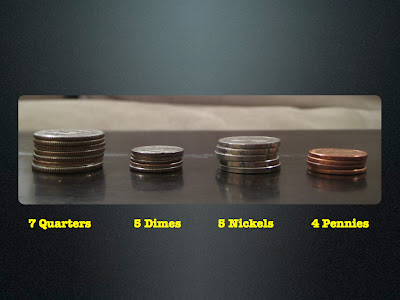 Students were chatting, drawing pictures, using tally marks, adding by grouping, and using other strategies. One student asked, "Can we get out our money bags?" My response, "Shyea!" (translated yes). It was fascinating to see them operate for that short amount of time. I wish I had taken pictures. Sorry everyone! I had to leave.

This morning before the lesson, the teacher and I talked about the expectation of her students and the original task. She knew her kids were capable of finding the total and half. However, she also thought that finding the fewest coins might prove to be a challenge. The second grade teacher and my pals on Twitter were right. I think Act 1 deserves an edit saying, "My wife wants half of the money." This allows the sequel to be, "What coins would my wife get if she also wants the fewest coins?" and this can be used for the early finishers.

This experience reminds me that I need to record one of these 3 Act lessons so you guys can help me get better at doing them. There's still a ways to go, but I'm loving the opportunity to work with other teachers and grade level students. I've learned so much from these other teachers. I have a great respect for elementary teachers. I also love seeing how elementary students remind me that learning can be a blast. They're not going through puberty. They're energetic. They're so much fun! Not fun enough for me to pursue a multiple subject credential and teach primary though. I love my middle schoolers. I received an email from the teacher this afternoon saying:


It was hard, awesome, fun and different, cool, fantastic, interesting, the best, made us smarter, fabulous, I liked it, and magical!  Those were a few of the comments from my class about the math lesson this morning:)  Thanks for spending some time with us this morning!  It was fun for me, too!!

Soon, I will also be posting about my recent experiences in a 4th grade (Back Box2) and 5th grade (iPad percentages) classroom. Thanks for reading!