Have you ever tossed a puzzle at one of your students? Y'know, the puzzles kids can play around with using their hands and minds? It's crazy, right?! It's fascinating to watch a student display a wide range of behaviors: curiosity, engagement, perseverance, frustration, and an earnest desire to know the solution if they get fatigued and stumped. I have a couple bins full of puzzles in my classrooms that do this to kids. Students rarely have a chance to play with them, but when they do, they go bonkers in a good way. Occasionally, you'll hear a triumphant yell when someone solves a puzzle. Other students look in disbelief. It's hilarious. My collection of puzzles ranges from the Bedlam Cube (now known as Crazee Cube), to Cannonball Pyramids, to the Rubik's Cube, to Tangrams, to ThinkFun puzzles, to other miscellaneous puzzles I've picked up over the years. A few weeks ago, I was driving home and wanted to know if there was something I could do in math that had a similar magical effect on kids. 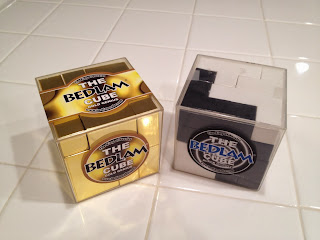 Have you ever tossed a puzzle at one of your students? The ones on paper that require logic and critical thinking? Those are crazy too! Kids can really get into them. Around the same time I was thinking about the power of physical puzzles, my school wanted to revamp our weekly intervention/study-hall period. I thought students could benefit from working on logic puzzles, patterns, or Get to Ten. I went to a resource called The Colossal Book of Short Puzzles and Problems by Martin Gardner in which Fawn recommended. I came across this Billiard Balls gem in which I remade for my students: 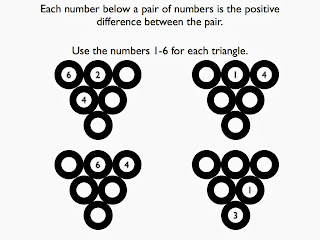 So I got to thinking and thought of some inspirational people/things from my PLN. I've always wanted to incorporate Fawn's Visual Patterns into my classroom more, especially with it's beautiful new makeover. Fawn is also known for her weekly problem-solving tasks. I've also wanted to incorporate more PoWs from the Math Forum. The Math Forum has an abundance of problem-solving tasks that range in difficulty across grade levels. Sign up, yo! Last but not least, Dan Meyer had impeccable timing and recently wrote a very invigorating post on [Fake World] Conjectures that has created quite the buzz in the comments. Personally, he struck a chord with me as he ended it saying:


Find those puzzles in the real world, the fake world, the job world, or any other world - it doesn't matter.

His post and quote made my day (with a smile).

The result of all these crazy things: Weekly POPS.


Patterns (or puzzles):
I will include a pattern either from Visual Patterns or one I create. As you can see from the handout below, it's similar to Fawn's form. I am adding a section for students to describe the pattern in their own words. If I decide not to do a pattern that week, I'll do some type of puzzle like the Billiard Ball puzzle above. 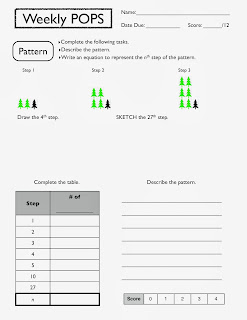 Order of Operations:
Students are to use the four given numbers and mathematical operations, symbols, and/or notations to get to the values of ten (or twenty-four). As you can see from the handout, students need to write the expression and evaluate it correctly using Order of Operations (or PEMDAS).

Problem-Solving:
Definitely one of the most important parts of the Weekly POPS, problem-solving. Right now, I'm finding old PoWs from the Math Forum's library to share with my students. As you can see from the handout, be sure to include the Math Forum's copyright information when photocopying. I'm looking for students to organize their work, demonstrate their solution strategy, and think critically. 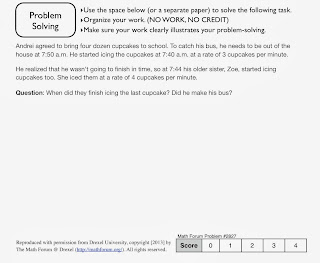 My goal with Weekly POPS is to get students to really think critically and problem-solve. Why? because they so desperately need it. It's challenging, demanding, and necessary. There's a slight puzzle feel to POPS. Students have really been into it this week.

Students receive the POPS every Friday and have a week to complete it. They'll turn it in the following Friday and receive a new POPS. I've invested a lot of time in class this week going over my expectations, but will use Monday and Tuesday next week to show my classes student POPS that are exemplars, average, and sucky. I told them, "You earn a zero on your POPS, it's the same as POOPS."

I look forward to this adventure with my kids. Here's a folder with the POPS I've created so far. Feel free to join in the action. If this link is broken, please notify me and I'll fix it, unless your name is Fawn.