In January, my Quotes of the Week post highlighted student comments captured during our first semester of the 2012-2013 school year. I'm here to post a few captured from the second semester. It's hard to compare them to the first half of the year, so let's not. Instead, let's just enjoy the comments, observations, or questions that students gift us with, enriching the mathematical climate of the classroom. 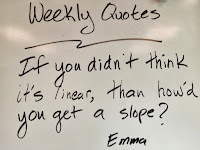 I experimented with Kelly O'Shea's Mistake Game in Algebra about midyear. Emma is presenting to the class about identifying linear functions, given three points. Justin (from the audience) claims that Emma’s graph is NOT linear, but says there's a slope to her three points. Without skipping a beat, Emma unleashed this response at Justin. Way to go Emma! Talking smack with math vocabulary. 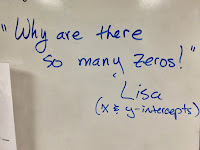 Students were exploring x- and y-intercepts using Desmos.com. After graphing a few lines and writing down the ordered pairs of each intercept, the wheels started to turn inside of Lisa's head. She saw the structure and pattern of the intercepts containing zero. The follow-up:

Me: So Lisa, why are you seeing all these zeros?

Me: What are the intercepts of the lines?

Lisa: It's where the lines hit the x or y axis.

Me: So what's up with all the zeros? 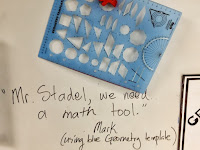 Mark needed to graph a straight line as part of his task. That week, we had just spent an entire class period doing a Jigsaw activity so that the students could explore the 8 Standards for Mathematical Practice. Mark is proud to be using Mathematical Practice 5, Use Appropriate Tools Strategically. 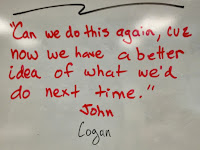 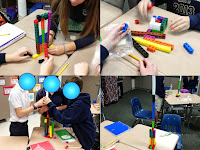 Groups were given a warm-up one day where they had to collaborate and stack the highest and strongest tower using 100 snap cubes. I determined the winners by kicking the desks they stood on to see who survived Earthquake Stadel the best. While cleaning up, Logan is noticing that he could do a better job next time. This is exactly what we can do in the math classroom: learn from our mistakes, come up with a revised problem-solving plan, model, collaborate, and persevere. 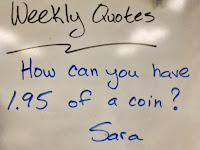 The class was doing a cocktail of mixture problems one day. They were collaborating with their groups and one group had your typical coin question. Something along the lines of:

I have $9.75 from X amount of nickels and dimes. How many of each coin do I have?

Upon solving the question on their whiteboard, Sara quickly realizes that you can’t have 1.95 of a coin. She was the first to notice it and say something to her classmates about this contradiction. The group first tried looking for their mistake and then tried solving the question again. Good job girls! 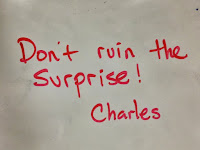 Midyear, I showed all my classes the 1st Semester QOTW slides. For the first month following these slides, Charles was trying to turn every little thing he said into a quote just so he could be up on the board. As I've mentioned before, these can't be planned or contrived. These quotes just come out naturally in the regular happenings of classroom interactions.  Students were doing some individual work one day, and Charles actually let a good one slip out. He was still working individually on the task and didn’t want his efforts spoiled by someone blurting out the correct answer. How many times have we been there, either on the receiving end or the one ruining it for others? 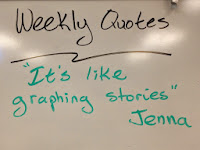 This is Jenna's response to the following video:

I asked the class for their interpretation of the video or any of the drawings? Was there a drawing they could relate with? Without blinking, Jenna says, "It's like graphing stories." I totally agree. It had been awhile since we explored graphing stories, so Jenna just confirmed what a great impact that concept had on her. Very cool! 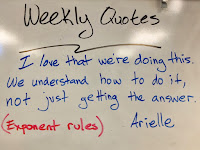 Arielle is a former QOTW winner. Students were exploring exponent rules by finding mistakes. Michael Pershan and I have done some extensive blogging about this. Anyway, we had reached the final day or two of learning through mistakes and Arielle raised her hand and shared this gem with everyone. It's a beautiful observation in my opinion about the importance of math mistakes, learning by making conjectures, and students coming up with the rules on their own instead of me spoon-feeding them. 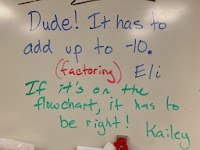 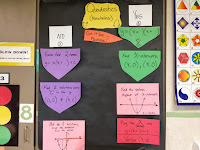 Two quotes in one class period! That's a first. We were playing Race Car Math and one of the review questions asked students to factor a polynomial. Eli, a boy a few words, caught his group-mate incorrectly factoring the polynomial. I love the “Dude!” part of his quote.

Also during Race Car Math that day, Kailey was so excited to be on the board after correctly graphing a parabola, following the flowchart we put up in class. Our class flowchart is shown. 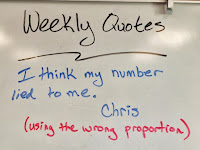 Last, but not least, Chris closed out the year with, "I think my number lied to me." In geometry, we were reviewing volume of a sphere with questions similar to Nathan Kraft’s volume of a soccer ball task. Chris set up, and used the incorrect proportion when solving. When arriving at an unreasonable answer, he realized his numbers lied to him. Way to check for reasonableness!

It's truly been a pleasure having the QOTW section carved out on my whiteboard for student quotes. As far as I'm concerned, this will be a staple in my classroom for the remainder of my career. I look forward to next year's quotes!