Mistakes to the Half Power

Today, after completing Day 128 of Estimation 180, we briefly reviewed the first four questions of the handout from Day 1 of exponent mistakes. Read about Day 1 here. We then attacked the next four questions and each of my four Algebra sections had different ideas, explanations, successes, and challenges. It was beautiful.

Question 5 brought the best conversations of the day. Many students thought that 100 to the half power was 5000 because they went 100*50, thinking 100 should be multiplied by half of itself (50). There were two classes with one student in each that thought the answer was 10, but each student had a difficult time articulating their reasoning. Those two students weren't necessarily convinced with their answer either. I took the lead on this one after hearing this from a couple of students:


Me: Do me a favor and evaluate each of those four expressions.

It helped that we already proved a zero exponent simplifies to one. PHEW! So I stood there with a nondescript look on my face and asked students to make observations. They got my "What do you wonder? What do you notice?" face.


Me: Let's talk number sense here everyone. Where would we place 100 to the one-half power?

Me: (to the class) What do guys think?

Me: Is it enough to convince you all? Will this work every time? So let's try this:


Me: Which one of these is a perfect square?

Me: So what can we conclude about something to the half power?

Student: It's the square root.

I toss up a couple expressions for confidence: 49^1/2. They shout, "seven!" or 64^1/2. They shout, "eight!" Now, if you want to really mess with some of your kids, throw 27^1/3 up on the board and ask, "So what is something to the one-third power?" You might get lucky with a kid that says 3. Maybe walk them through that one. For my honors kids, I would ask, "What number on the board is both a perfect square and perfect cube?" You know you have a smarty pants when they say 64. That's a gem right there. Don't expect that often in 8th grade. That's my Elijah! (the closest I'll get to Fawn's Gabe.)

In one of my classes, Arielle came out of nowhere and gave us this gem. I immediately put it up on the Quotes of the Week board. 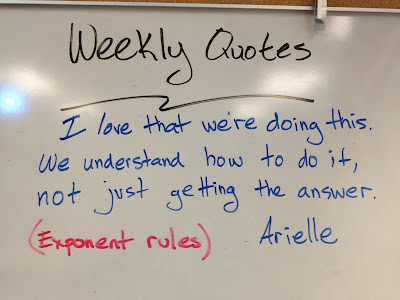 That's right! We're exploring these rules and students are defining them through observations and patterns. I think students have a better understanding of these properties and rules when given incorrect solutions (mistakes). In case I don't have time to wrap things up with you about tomorrow, the handouts from this week will be at the bottom of this post. Michael Pershan recommended I tell students that some solutions are incorrect and some are correct. I tried that out for Days 2 & 3. We only had about ten minutes to start today's handout. After their abbreviated individual time, I put these two things up on the board:

I had students stand and vote once (by raising hand) for the question they wanted to know the answer to the most. I kept a quick tally. Most classes picked question #8. Still standing, I told students to either face the hallway if they thought the question was correct or face the windows (opposite the hallway) if they thought the question was incorrect. I take a quick tally. Sit back down and have students share out loud. I'd resume Fish Bowl if I had more time. Try this sometime. Fun.
Tomorrow: more group work, less teacher.