My two-and-a-half year old son loves black olives just as much as I do. Tonight at dinner, my wife placed two olives on our son's napkin. Surprisingly, the olives remained untouched for a few minutes. He made some descriptive comments like, "The rice is delicious. The egg is delicious. The milk is delicious." You can tell what vocabulary we use around him, right? Quite the eclectic dinner, I know. Unbeknownst to me as I was taking a bite, he grabbed an olive with his hand so he could put it on his finger to eat and says, "There's one olive left, Dad!" Here's how the rest of this played out:

Me: "Yes, after you eat the one on your finger."
(we've had this conversation before)
He quickly shoves the finger-olive into his mouth.
Not wasting anytime, the olive-gobbler grabs the lonesome olive on the napkin and exclaims, "Now there's zero olives!"

This made my heart skip a beat. We haven't talked about zero for a couple weeks now. In previous olive consumptions, I've questioned my son how many are left after he devours his portion. He would sit there quietly and perplexed or would usually reply with a little, "hmph?" After giving him some time to think and reply, I would jump in and offer him a description simply labeled "zero." It kills me that a couple of his toys have the numbers one through nine, but no zero. For example, check out his toy phone. Where's the zero people??!! Seriously? 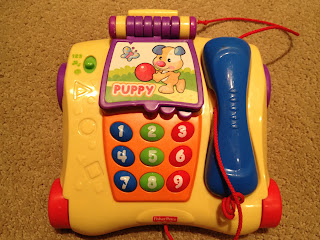 I'm a huge fan of using zero in math as much as humanly possible. To see it missing from toys means it could be missing from my son's vocabulary unless I work it in. He has placemats with letters, shapes, and numbers. Guess what number is missing. Zero plays a key role in number sense and math. My students know one of our class mantras is, "We love zero!" Zero is a wonderful number.

I start over by holding up two fingers and repeat my questioning. Same exact response from the olive-gobbler. So it didn't work with the fingers. Later on during our dinner I put one of my olives on his napkin. He grabbed it.
Olive-gobbler: Zero olives left!
Me: You're right.
I put our workout on zero to rest for the night. We're getting there.

I cherish this post because it involves my son, olives, zero, and number sense. This is my first time blogging about my number sense experiences with my son, inspired by Christopher Danielson and the many number sense conversations he has with his children. Thanks man!