Today in Geometry, we're discussing two lines, a transversal and the angle relationships formed. We did a few minutes of word wall pics and direct instruction of Corresponding angles, Alternate Interior angles, Alternate Exterior angles, and Same-side (or Consecutive) Interior angles. Then students were presented with the following setup on my walls. I used three strips of masking tape to create the lines intersected by a transversal and numbered stickies. I was able to set up 3 stations since I have a small group of 8th grade Geometry students this year. 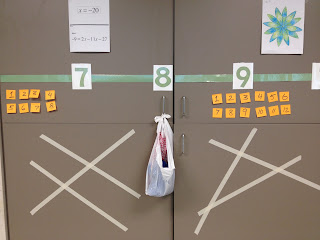 Students worked in groups and were instructed to start with the two parallel lines and the transversal. It's a lower entry point as opposed to the three lines intersecting to form the triangle (which my textbook chooses to introduce this concept. Silly publishers). Groups are given the following handout and need to place the stickies in the correct places, based on the given clues. Work together, GO!
Handout and solutions here. 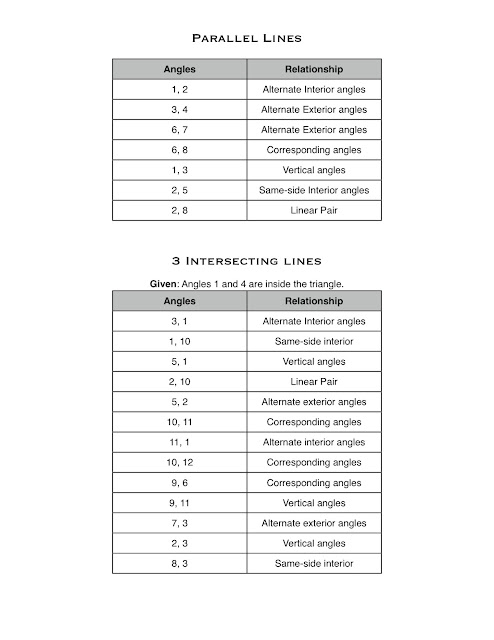 If you have limited space, create 1-2 stations and have groups rotate as other students are completing a task at their desk. Put a timer on the board and tell the students to get as far as possible within the allotted time. When the timer finishes, I'd take a picture of their work, reset the stickies, and let another group tackle it, resetting the timer.
Here are possible solutions. Let me know if you find any errors. 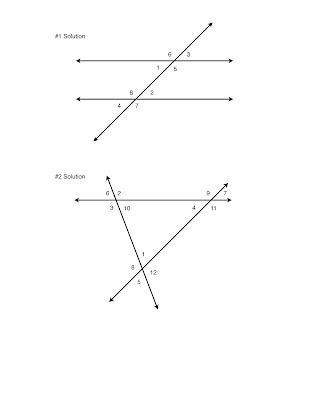 It went well. There was a lot of tension in the groups. Some kept moving stickies around because they disagreed. They disagreed because of the overall connection, not because of getting the relationship wrong. It was so fun to hear them get so excited about this activity. We ran out of time and the quote of the day came from a girl, "That's upsetting me." She wanted to finish. She wanted to know the answers. She wanted to figure out the puzzle. Many other students had similar feelings. I love it!

What I learned: Don't make the groups too large. Go with about 2-3 students (4 max) per group. Use really good stickies. The orange ones you see in the pictures were old and had lost their stickiness. If groups are struggling too much, encourage them to find a set of angles that has the least amount of possibilities.