Tonight, my son wanted me to work with him on his new puzzle. 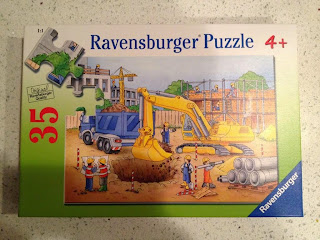 I don't know your strategy for doing puzzles, but I find all the corners first and then start putting the border together before I start working on the inside. Look at that box again. Would you be able to determine the dimensions (in puzzle pieces) of this puzzle by knowing the total number of pieces?

That was my first question:
A) If you know the total number of puzzle pieces, could you think of the all the possible dimensions (in puzzle pieces) of the puzzle?

Then came the next question:
B) Estimate the actual dimensions (in puzzle pieces) given the picture on the box?

Answer:
I'm going to go with 5x7 because five and seven are the only factors of 35 that would reasonably make the rectangular picture on the front of the box. The puzzle should be 5 pieces high and 7 pieces across from left to right.

With a box of 35 pieces, these questions aren't too ridiculously challenging. However, I know there are crazier puzzles out there in the world; puzzle with 500, 750, 1000 pieces, etc. That's where I called on Twitter to help out. Like a champ, the #MTBoS came through and hopefully will continue to come through with #puzzlemath.

Below are some of the tweets I received followed by additional math questions I'm curious about.

Additional Questions:
C) If you think you know the dimensions, could you determine:

If so, could you write a rule for any of these?

D) Knowing these quantities, say you randomly choose a puzzle piece, what are the chances it's:

Please add to the collection of puzzles and questions by tweeting with the hashtag #puzzlemath.