If someone is trying to curtail their use of profanity, they might set up a Swear Jar. Every time they use a swear word, they deposit an amount of money inside the jar. Since there are a variety of swear words, the incentive is to consciously be aware of your profanity with the intention to minimize your profanity and find other (less colorful) ways to communicate. 
You might remember I blogged about the power of Command-F (Mac) and Control-F (PC) when finding a specific term within Desmos activities. I'm utilizing the same tool here when looking for specific math terms in student conversations when playing Polygraph. I also like the idea of keeping track of the frequency of terms used from the word bank. If you want a math swear jar, I added two columns to keep track of taboo words. On a related note, I recently blogged about word banks and taboo words in Polygraph. Check it out.

In the video, I mentioned the idea of having some incentives in your math classes. For example, if you're a single-subject teacher and have multiple sections of Algebra, you could turn it into a friendly competition between class periods. The class with the most variation and use of terms from the word bank with successful polygraph games gets [fill in the blank].

Click here if you want copy of the spreadsheet featured in the video above.

As much as I love the Command-F feature to find terms on a webpage and keeping track of them in a Google sheet, I would love to see a Vocab Jar integration into the Desmos Polygraph. I think it would be a valuable tool for teachers to continue their formative assessment of student conversations and use of mathematical language.

What do you think?
If this is something you would find useful, would you send a +1 to Desmos for me?
If you have a way to improve this idea, leave a comment below and Cc desmos. 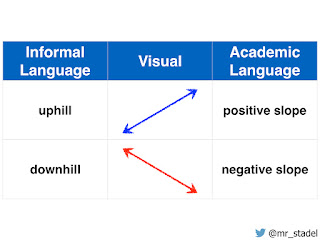 BONUS feature:
You've heard of a swear jar, right?
When someone is trying to curtail their swearing and/or use of bad words, they'll set out a swear jar, placing an amount of money in the jar every time they use a bad word.
*Consider the idea of a VOCAB jar in your math class. (future blog post coming soon)
Posted by Unknown at 9:48 AM 5 comments: