Today was a good day. Yesterday wasn't and I'll leave it at that (strictly speaking of school). One of those days where I couldn't find a wall fast enough in order to bang my head against it not once, but multiple times. It's a great thing that I get to end my days with my wife and son. My students are having a blast finding Felipe, our classroom Elf on the Shelf, each day. With a waterfall schedule, my last class of the day gets to hide him for the next day. It's a fun little activity for the kids to burn some energy off until the holidays. We did our seasonal estimate today and I started my Algebra classes with this video: 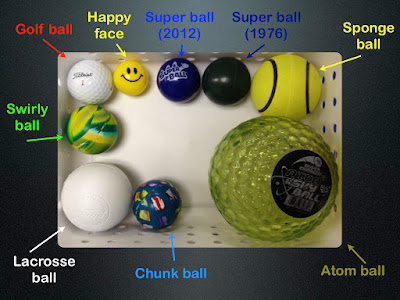 "Now, look at the balls and quietly, to yourself, make a guess. Guess which ball will be the best. In other words, which will bounce the highest? Now, guess which will be the worst? Don't say anything. Write that in the top corner of the handout you are about to receive. Don't share it with anyone." Students were looking at the screen, scoping out the different sizes, shapes, and textures of each ball. I saw some students writing the golf ball as the worst and the lacrosse ball as the best. Some were putting the Super Balls as the best. "Now, share your guesses with your group. Does anyone want more information about these balls besides just a picture." Trust me, it was very difficult not to work "balls" into the conversation as much as possible. Seriously, it can be fun to see them squirm, grin or laugh at times like these. I refrained from making comments like, "Don't worry guys, you'll get your hands on these balls soon enough." or "We're not playing with the balls people. Simply dropping them and seeing how high they bounce." C'mon people, "Make sure you handle the balls with care." You get the point.

I'm a slow learner. You've probably heard me say this before. This might be one of the best parts of my day. When introducing projects this year, I've made the mistake of displaying the handout on the screen first, having students read parts out loud, and throw in some pointers before they get their supplies. You can predict what happens next. Students get their supplies and start exploring the project in the wrong way or ask me questions to parts I already reviewed. What's the typical response? "Read the handout again." or "I already went over that. Ask a classmate." And you know with each student that you see not following directions or that comes up to you and asks what to do next simply gets more irritating with every time. For example, when we stole from Fawn Nguyen's Barbie Bungee, I'd see students simply letting Barbie hang freely from the top of their meter stick and measure that distance with every rubber band they added. They weren't dropping Barbie and measuring the lowest point she extended to. So it dawned on me, once again because I'm slow. "Everybody, you are to read the entire handout with your group first. When you've done that, come up to me and explain what you are doing. If you accurately tell me in your own words the objective and directions of the project, you may grab a ball and start collecting data. If you can't, I send you back to read it again." Money! It worked like a charm. Students knew what they were doing. They knew the correct steps. They knew what increments and how many drops per ball. It was great. I still have to do the Barbie Bungee project with my Algebra Honors class and will see how well they do with reading the directions.

Here's what students did today. Students were to use one ball at a time to drop the ball from 10 cm to 1 meter using 10 cm increments and at least three drops from each increment. Once they completed that, they were to exchange their ball for another ball and do this for a total of three balls. Hint: no one was allowed to use the 1976 Super Ball until they collected data for two balls first. Plus, I don't let the 1976 Super Ball out of my site. I've had that since I was a kid and do you know what those guys go for on eBay? They kept track of the rebound heights and were to make observations. Were there any constant changes? If not, was there a close average change? Our goal is to predict the rebound height of a drop from 3 meters and from our balcony of 5.7 meters.

At least I didn't play this video to intro the lesson.