A few weeks ago I was out with my family and caught a glimpse of two kids playing Rock, Paper, Scissors. I immediately made a note of it on my phone for a 3 Act lesson. Here's what I came up with for Act 1:

In my mind, Rock, Paper, Scissors (RPS from here on out), is such a powerful way to decide something between two people. I think of all the times it decided who got to ride shotgun, who got the last piece of pizza, who got to go first, etc. We're talking a huge playground staple (at least I think it still is). I have no idea if the two kids were deciding something or just playing RPS for fun. It doesn't matter! I wanted to know who would win? Were they playing straight up to one? Were they playing the best 2 out of three? Who has the advantage: rock, paper, or scissors? What are the chances of a tie? A lesson was born... I have to get it down on paper or make a digital note of it somewhere. Imagine the class activity that could result from this... that will be a future post.
I'll admit, I was proud of this Act 1. I thought I had a slam dunk. Feedback from some tweeps said they preferred the scoreboard (thank you twitter and online colleagues). As you can see only 7 people have viewed it on 101qs.com so far and 3 of them skipped it. Usually those first 7 people are the regular 101qs users who post first. I admire them. I dig their attentiveness. I could list them, but I won't. They're awesome! 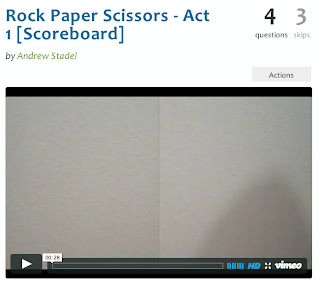 I'm over the initial bewilderment that it barely passes 50% perplexity. There's a bigger, more important element here besides my state of mind: comments. That said, I'm excited with Dan Meyer's most recent update to 101qs.com, specifically the option to leave Comments. I would love to hear from those 3 people and what prompted them to skip it? How could I improve it? What about RPS did not perplex them? Bottom lime: I look forward to receiving constructive feedback on 101qs.com just as much as giving it. Our students, classrooms, and craft of teaching all benefit from it. I think Vimeo sums it up nicely when leaving comments, "Be cool and play nice."
What do you think?