Here's my recap on CMC South 2013... or how I developed a man-crush on Robert Kaplinsky.

Thursday night:
I drove out to Palm Springs and met up with Karim and Fawn. We found a nearby casino, math-chatted, and then landed at the roulette table where $20 lasted me for a good chunk of time. I broke even and called it a night.

Friday:
Fawn and I spent the first session reviewing our presentation in the lobby on my laptop. Poor Fawn, I think she was regretting her decision to present with me. 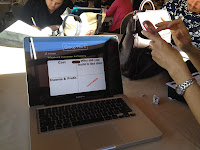 We reached a point where we couldn't think of anything more to review so we walked over to Robert's session at the Hilton. Lucky us, we were able to sit with John Berray, Avery Pickford, Breedeen Murray, Karim, and John Stevens. 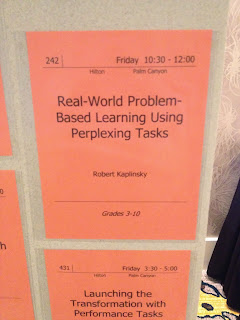 You can read a better recap of Robert's session at Dan's blog. Robert did a fantastic job. He really did. Therefore, I guess I should explain my man-crush now, right? I think Robert has such an edge right now that the #MTBoS, math community, and those in education can all benefit from. Follow him on Twitter, use his lessons, read his blog, and get him to your school for some trainings or to observe... because he's totally willing. He has an edge because he's still in the classroom working with both students and teachers in his district. He's eager to ask questions that will make him better while at the same time will share the mistakes he's made and how's benefited from them. He delivered a stellar session that was informative, humble, resourceful, fun, engaging, honest, and necessary. Seriously, we need more Robert Kaplinskies out there working with both teachers and students. Follow him on Twitter, use his lessons, and read his blog. Lastly, if you get a chance to meet Robert and spend five minutes talking with him, you'll quickly see that he's interested in what you do and is more than willing to be in your classroom so he can observe and learn. He eagerly wants to improve his craft in education, learn from others, and find ways to be more effective at what he loves doing. Very inspiring!

Fawn and I presented after lunch. The title of our session was: 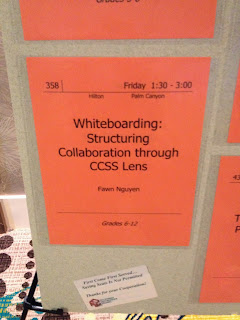 It was such a pleasure to collaborate and present with Fawn. She came up with this great math task and I look forward to presenting with her again at CMC North. She's probably dreading the thought of presenting with me again! Not to spoil anything for our CMC North session, we had attendees use snap cubes to build something that involved income and a building cost. The task required strategy, problem-solving, collaboration, and a lot of calculations. Groups were required to present their calculations, information, and reasoning on their giant whiteboards. How vague was that description? Don't worry, we'll post more after CMC North. In the meantime, here are some pictures from our session:
Thanks to all those who helped enter calculations, pass out things, clean up or kept us on track during our session.

We were able to make the last half of Jo Boaler's presentation after we cleaned up our session and headed back to the convention center. I look forward to taking her class in April 2014 and my take-aways from her session were:

Keep an eye on her site www.youcubed.org

Saturday:
I rolled in casually late to Michael Serra's Polygon Potpourri session. No need to describe the fun found here as Dan already recapped it.

CMC South wouldn't be right without attending a Brad Fulton session. He's interactive, funny, and engaging. Next time you get a chance to see him present or give a workshop, be there! His focus was on Math Talks. Fawn shared a little insight on his session here. However, she took it a giant step further and generously created a space for us at mathtalks.fawnnguyen.com to share student thinking and giving students a voice.

After lunch, Fawn and I went to Avery's session. Dan did a recap and Avery did two posts: part 1 and part 2. Check it out! Unfortunately, I had to leave early to go get my materials and set up my presentation. My take-away was working with the Locker Problem and Avery sending me this resource. I've never tried the locker problem, so it was a bunch of fun to play with. He also shared this gem which he demonstrated with snap cubes using the document camera (very cool!): 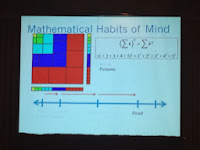 I presented last at CMC and wanted to thank those of you who were able to make it, even if I was your fourth choice after seeing Dan Meyer's sold-out arena. The title of my presentation was: 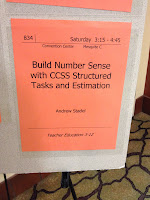 Overall, I think my session went well. I wish I could give this talk again, after a little more refinement. I could've used ten more minutes to better connect with the 8 Mathematical Practices. However, there was a lot to share, interact with, and discuss. I learned a great deal from my attendees; especially on rating the level of difficulty with estimation challenges. My attendees got a sneak peek at Days 176-180 of Estimation 180 and I hope you had as much fun as me. I look forward to sharing more with you about this session in a later post.

My CMC regrets: I wish I could've attended the sessions by Karim, Breedeen, and the dynamic duo of Matt Vaudrey and John Stevens. I've linked their names to their sessions. I look forward to CMC North. Maybe I'll see you there.